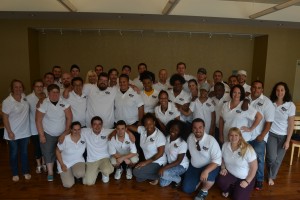 UFCW Local 653 and 1189 members met with their legislators in St. Paul, Minn., to talk about increasing the minimum wage and other issues important to working families.

Last week, members from UFCW Locals 653 and 1189 talked with their Representatives at the State Capitol in St. Paul, Minn. The members lobbied for increasing the minimum wage, for the passage of paid sick leave, and medical cannabis laws.

UFCW Local 1189 member Dave Vasquez, who works on the kill floor at Dakota Premium, was happy to be sharing his concerns with legislators.

“It’s important for Representatives to hear from their constituents. Workers and regular people need to be talking to them because that’s who puts them into power and feels the most impact from these laws. Coming to the capitol helps us make our case and make some positive changes.”

Jillian Roemer, a UFCW Local 1189 member was particularly interested in talking with legislators about the importance of paid sick leave.

“I’ve done the math and I’ve lost $240 from being sick just this year. The times I got sick were usually from someone coming to work sick and infecting me. It’s incredibly frustrating. If it’s affecting me, it’s affecting others. In the service industry, paid sick leave should be a no brainer.”

Legislators themselves were happy to see UFCW members throughout the capitol. Representative John Marty felt that UFCW’s presence would go a long way towards ensuring an increase in the minimum wage.

“We need working families to speak up on minimum wage and once we get that victory we have to keep going further. UFCW members being here push that train forward. Without you, it doesn’t move.”

“I thought the day was a huge success,” said Diana Tastad, a UFCW Local 1189 member who has worked at Kowalski’s for four years. “Legislators are too often out of touch with working people. They need to hear stories about not being able to feed our children. They don’t know what it’s like to go to bed hungry. The companies we work for spend money on lobbyists and are here all the time. We don’t have that money, but we have our voice, that’s our power. We can’t not show up.”