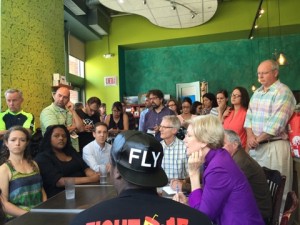 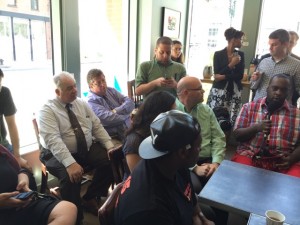 Sen. Elizabeth Warren (D. – Mass.) held a roundtable in Mass., on July 20 with members of UFCW Local 1445, fast food, coffee shop, and supermarket workers who support employees’ scheduling rights. Warren’s bill (S 1772) would require that businesses with more than 14 employees grant requested scheduled changes to accommodate a worker’s education or job training, a second-job, a health condition or to care for a child or elder. The bill would also require employers to compensate employees who are on-call, even if they are not called into work and to provide advance notice of work schedules.

“It is the lowest paid workers who have the most chaotic scheduling,” Warren said.

Jeff Goldhaber, a 23-year Stop & Shop employee from Mansfield, Mass., and a member of UFCW Local 1445, said collective bargaining agreements have ensured more stable scheduling by the supermarket company during the roundtable discussion.

Supporters of the legislation said it would curtail a practice where hours vary wildly from week to week and rigid work schedules impede other personal and professional pursuits.

Macy’s Workers Continue to Fight for Their Rights

Last summer, cosmetics and fragrances workers at a Macy’s store in Saugus, Mass., got a union voice on the job with UFCW Local 1445 after the National Labor Relations Board issued a ruling that the group of 41 cosmetics and fragrances workers was an appropriate unit for collective bargaining. The NLRB then opened and counted the workers’ ballots – which had been impounded while the NLRB considered (and rejected) Macy’s appeal that the unit must include all the sales employees in the store – and certified the local union as the workers’ bargaining representative.

UFCW Local 1445 then asked Macy’s to meet and bargain a first contract for the workers but Macy’s refused to bargain in order to challenge the NLRB’s determination that the cosmetics and fragrances workers are an appropriate unit. Workers did not give up in their fight for a fair contract and a right to have a voice on the job. UFCW Local 1445 filed an unfair labor practice charge, and the Regional Director of NLRB Region 1 issued a complaint against Macy’s. The Regional Director and the local union urged the NLRB to quickly rule against Macy’s without a hearing and find the company’s refusal to bargain unlawful.

Last week the NLRB ruled that Macy’s refusal to bargain is an Unfair Labor Practice. This latest ruling is an important win for the Macy’s workers because it moves them one step closer to their goal of forcing the company sit down with them and bargain a fair contract in good faith.

“Despite the long struggle, we are sticking together and standing by these Macy’s workers. We are continuing to put pressure on the company both inside and outside of the store to do the right thing and bargain with workers. We will not stop fighting until these workers get what they voted for, a union voice on the job and a good union contract with fair wages and benefits,” said UFCW Local 1445 President Jeff Bollen.

Macy’s is now expected to appeal the ULP ruling by petitioning for review of the ruling in a federal court of appeals. UFCW Local 1445 will continue to support the Macy’s workers with leafleting, rallies, and informational meetings to keep the pressure on the company until they sit down to negotiate a fair contract.