This year, the UFCW is once again supporting the Poor People’s Campaign and the “Poor People’s and Low-Wage Workers’ Assembly and Moral March on Washington and to the Polls,” which will take place on Saturday, June 18 at 9 a.m. in Washington, D.C.

For several years, our union has partnered with the Poor People’s Campaign: A National Call for Moral Revival as they work to shift the moral narrative, build power, and make real policies to fully address poverty and low wealth from the bottom up. Founded by Rev. Dr. William Barber II and Rev. Liz Theoharis, the Kairos Center for Religions, Rights and Social Justice at Union Theological Seminary, and hundreds of local and national grassroots groups, this campaign is uniting tens of thousands of people across the country to challenge systemic racism, poverty, the war economy, ecological devastation, and the nation’s distorted morality.

Local unions within driving distance of the metro-Washington area are encouraged to join in person and those outside of the area to join virtually. If you are interested in participating, please RSVP here and also with Ben Cassel in the UFCW’s Civil Rights and Community Action Department at bcassel@ufcw.org.  The RSVP form gives you the option of attending in person or virtually.

You can get more information about the Poor People’s Campaign march here. 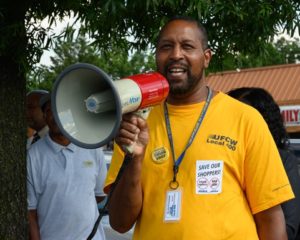