Last week, the UFCW joined millions of American workers across the country in mourning the death of AFL-CIO President Richard Trumka. For more than a decade, Trumka led the AFL-CIO, which is a federation of 56 national and international labor unions — including the UFCW — and represents 12.5 million working men and women.

“We are shocked and profoundly saddened by the untimely loss of AFL-CIO President Richard Trumka,” said UFCW International President Marc Perrone in a statement. “President Trumka was a powerful champion for workers his entire life, and a giant in the labor movement who always led the calls for justice, equality, and fairness across America.

“President Trumka was a defining example of how one can lead a life that inspires the souls and spirits of others, no matter the struggles they have faced,” Perrone added. “Above all, President Trumka was a friend and a stalwart ally to me, our countless local union presidents, and the 1.3 million members of the UFCW, and was always there to help better the lives of our members and their families. It is difficult to put into words what his loss has left across the labor movement. We only wish that his family and loved ones can find comfort and peace in the fact that he left an indelible mark on our nation and he will be remembered forever.” 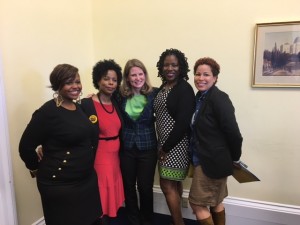 Kim Mitchell (pictured in red) along with AFL-CIO Secretary Liz Shuler (center) and other attendees of the even on the Hill.

On March 17, the AFL-CIO launched the results of a survey of nearly 25,000 women, including union and non-union members across the country. Over 800 UFCW women retail members participated in the survey. The launch of the survey and the hashtag “#EqualPayEqualSay” arose from working women overwhelmingly calling for equal pay for equal work, more control over their schedules on the job, better quality of life – and the resounding conclusion that their union was the most powerful tool to reach a better life for working women and their families.

AFL-CIO Secretary-Treasurer Liz Shuler, joined by Congresswoman Rosa DeLauro (D-Conn.) among other elected officials at the press briefing, heard from UFCW Local 400 member and Macy’s worker Kim Mitchell, who spoke about how her union contract won her three weeks’ notice on her work schedule, vacation days, paid sick leave and a pension. Kim called for rights and respect on the job for women who hold full-time jobs, numerous jobs, and care-taking responsibilities that are often overwhelming and exhausting.

The survey revealed overall that 62 percent of working women are the primary breadwinners in their family. And 30 percent spend 30 or more hours a week on caregiving responsibilities. With a very demanding schedule between work and home, over half have four hours or less a week of personal time – only 35 minutes per day.  Retail women in particular identified their top issues as not getting enough hours, unpredictable work schedules and lack of control over their work schedules, with 59 percent of them saying they face unpredictable hours.

When women were asked to pick the social or economic issues they would personally take action on to change, the overwhelming top answer (46 percent) was “equal pay for equal work.”  In this important election year, it is particularly important to understand these top priorities because 75 percent of these working women are planning to vote in the November 2016 election.