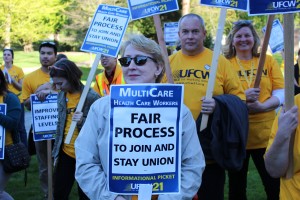 On August 11, MultiCare workers from Covington Emergency Department in Washington state, voted to join UFCW Local 21. With a union voice, the health care workers will now have the tools to provide better quality care to patients and support each other in the workplace. Key issues that were important to workers include job security and protections, cost-of-living increases and yearly step increases, labor management committees to address staffing concerns, and affordable benefits.

For years, the current UFCW 21 members at MultiCare have been pushing for a fair process for workers to be able to join and stay in their union. In the 2015 negotiations, the nearly 2,000 current members kept pushing for this as an integral part to the negotiations. During a negotiation session in early May, Covington ED worker Rebecca Anley came to a to talk with the bargaining team and thank them for “standing with us” at Covington ED.

The win is a result of the team effort between current members working closely with interested workers and the strong support from the community. By working together, members won the conduct agreement that included the community election provision in the contract. This, and the courage of the workers at Covington are what helped bring about this organizing win.

MultiCare Health System is a not-for-profit health care organization based in Tacoma, Wash., that made over $700 Million in profit in the last three years. It is the largest private sector employer in Pierce County, Wash. 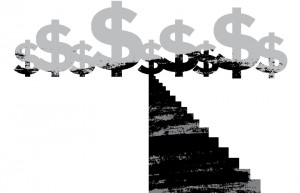 Two members from UFCW Local 21 wrote an op-ed that ran in The Seattle Times about the need for higher wages and paid sick days.

Higher Wages and Paid Sick Days Matter for Everyone

We know a thing or two about low wages and paid sick leave. We are two retail workers in King County. Our union, along with many others — and health, faith and community organizations — support a higher minimum wage and paid sick days. We support these benefits for all workers. Not some, but all, regardless of whether the person is a union member or not.

Here’s something we bet you didn’t know: About one-third of Macy’s workers who are in our union, UFCW 21, and work in the downtown Seattle store are paid minimum wage. While the new higher minimum wage rose to $11 an hour April 1 in Seattle — and will go up to $15 in 2018 — it’s still not enough to pay the rent.

But, at least in Seattle, a worker who is sick doesn’t have to miss a day’s pay because the city’s Paid Sick and Safe Time law allows employees to stay at home and care for themselves or a sick family member without losing a day’s pay or facing discipline.

We have tried to get Macy’s and other employers to provide a higher base wage and paid sick leave in contract negotiations so that all workers, not just those who happen to work in Seattle, earn a higher wage and sick days.

Higher wages and paid sick days matter for everyone, not just retail workers. When you shop, wouldn’t you want to know that the worker in the store where you’re spending your money is at least able to pay their bills and not come to work sick? If you’re like most people, of course you do.

Macy’s is not the only employer that foster these inequities. For instance, if you work for Fred Meyer at one of its Seattle stores, you get the higher hourly wage and paid sick days.

New laws like the $15 minimum wage and paid sick days in Seattle did not happen because Fred Meyer wanted it but because our union, along with others, pushed for it. Is it right that just because you work in a store 15 miles north, east or south of Seattle city limits, you get lower hourly pay and lose pay if you stay home when sick? Of course not.

Things need to change and that’s why we have been pushing for increased wages and benefits in our state and nation’s capitols. We’re making progress. The state House recently passed statewide paid sick days and a higher minimum wage.

Unfortunately, the House votes were strictly along party lines — Democrats for, Republicans against — and the bill didn’t go anywhere in the Republican-controlled Senate. However, the issues are not partisan for the general public. The overwhelming majority — whether Democrat or Republican — support paid sick days and a higher minimum wage.

Until we can unclog the log jams in the state Legislature and Congress, we must continue to push for change wherever we can make it happen — and often this is at the local level.

That is why we were involved in Tacoma to help pass paid sick leave for all workers in that city and are also working there on a task force to develop a proposal for a higher minimum wage. Likewise, we are supporting efforts in Bellingham and Spokane for paid sick days.

We are proud to be part of a progressive union, working in partnership with tens of thousands of others inside and outside of the union movement to expand the wages, benefits and workplace rights of union workers and nonunion workers alike.

There are forces in this country that would like to effectively outlaw strong unions so that workers no longer have the chance to stand together and fight back against a bullying manager or unfair and unsafe conditions. But unions, working closely with community groups, are one of the few organizations strong enough to organize for change.

We can’t stay silent. Inequality needs to be faced and defeated. Let’s stand together and speak up for a better future.

Susan Hedman and DeQuan Hawkins are members of UFCW Local 21 and serve on the executive board. UFCW Local 21 has more than 45,000 members working in grocery stores, retail, health care, and other industries.