In an op-ed posted in The Hill , UFCW International President Marc Perrone writes that it’s “Time to change our reliance on low-wage, part-time jobs.”

He continues, saying that in today’s economy, far too many working families are being forced to work multiple, low-wage jobs in order to make ends meet, thanks to employers cutting hours and not paying a living wage. Specifically, he says that Walmart and its business model are driving this trend:

“Take Walmart, the largest private employer in the country, where tens of thousands workers rely on taxpayer-funded programs like food stamps just to survive.

We must not expect better from companies like Walmart; we must demand it.

Already we’ve seen workers from across the country join together to fight and take back control of their lives. Low-wage, part-time workers across the retail and the service industries are standing up for their right to higher wages, better benefits, and a voice on the job.

The simple fact is that incredibly dedicated workers, like Fermín Rodriguez of Los Angeles, California, have been at the forefront of the fight for better wages and working conditions.

Instead of acknowledging their responsibility to workers like Rodriguez, El Super went as far as to illegally fire him for speaking out for workplace changes that would improve the lives of his family and coworkers. Even in 2015, it took a rare court order demanding the company immediately remedy their unlawful treatment to get his job back.

The case of Rodriguez is sadly not new or unique.

Yesterday, at the White House’s Summit on Worker Voice, the struggles of Rodriguez and many other hard-working men and women were heard by the administration, employers, and advocates. It’s time America heard the real life struggles of those across the retail and other industries.

But talk will not be enough. We must take action.” 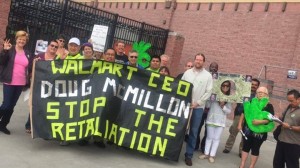 On August 24, Walmart workers and supports protested outside of the Walmart store in Oakland, Calif., where Walmart CEO Doug McMillon was expected to be making a store visit. While McMillon never showed up, the protestors called on him to stop retaliation against workers who speak out about low wages and unfair working conditions at Walmart. The workers involved in the protest included some from the Pico Rivera store – one of five stores that Walmart abruptly closed last April for alleged “plumbing problems,” laying off more than 2,000 workers with just hours’ notice.

Denise Barlage, who worked at the now closed Pico Rivera, Calif., store said, “We need reinstatement of all Pico workers. I told the manager, I’m sure you’re a nice guy, but you should never feel that you can’t be downsized as well.”

Margaret Hooten who works at the Placerville, Calif., Walmart store said, “I support unjustly fired people. I’m not going away.”

The Pico Rivera, Calif., store that Walmart closed was one of the most vocal in the fight for $15/hr and respect on the job. It was the first store to ever go on strike back in 2012. More recently, workers from that store held sit-down strikes and even participated in civil disobedience.