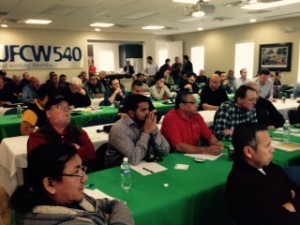 Local unions from across the country met in Dallas last week to outline a plan to help UFCW members take advantage of President Obama’s executive action on immigration.

Local unions from across the country met in Dallas last week to announce and outline a plan to help UFCW members take advantage of President Obama’s executive action on immigration. On November 21, the President’s action provided relief to immigrant workers, families, and communities. His executive action will make the parents of U.S. citizens and legal permanent residents eligible for work authorization. It also expanded relief for those who came to the U.S. prior to turning 16 years old and have been here for five years by removing the age cap for eligibility. The UFCW is committed to making sure its members are first in line when these programs go into effect in 2015.  The UFCW plans to set up comprehensive workshops where members can file applications and have their legal questions answered, similar to the Union Citizenship Action Network (UCAN) program. For more information, visit www.ufcw.org/immigrationaction. 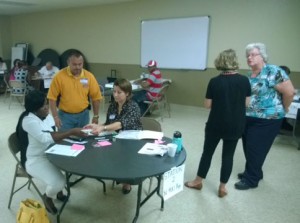 UFCW members attend a UCAN workshop to learn about how to become U.S. citizens.

On August 23, UFCW Local 431 Cargill workers attended a UFCW Union Citizenship Action Network (UCAN) workshop in Beardstown, Ill. The workshop focused on legal services, the process to become a citizen, and other immigration and citizenship issues. Nearly 75 people attended the workshop and 22 people received assistance filling out their naturalization applications. This will start them on the path to becoming U.S. citizens.

In the face of inaction on comprehensive immigration reform by Congress, the UFCW launched the UCAN program to be a resource for workers looking to apply for citizenship. UCAN helps provide the proper documents, legal counsel, and other assistance necessary to get the process started. The program also positions the UFCW to be able to help many more workers once comprehensive immigration reform becomes law.

In Beardstown, the UFCW partnered with the National Partnership for New Americans, the Illinois Coalition for Immigrant and Refugee Rights, the Immigrant Project, and the Center for Worker Justice of Eastern Iowa. African language translators and interpreters were made available to meet the needs of workers.

Upcoming UCAN workshops will be held in West Liberty, and Waterloo, Iowa, respectively.