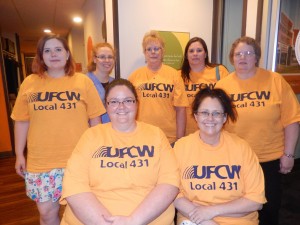 Jewel-Osco Pharmacy workers in Clinton, Iowa, have voted to join UFCW Local 431. The 16 workers decided to come together to join UFCW Local 431 to be able to negotiate a fair and systematic way to solve workplace issues, secure schedules, and improve wages and benefits. Several workers have been working at the location for years without a pay raise.

“It was important to us to have a say when it came to our jobs and our work. Now that we are part of a union, together we have the strength to make sure that our voices are heard and we have the power to make our jobs better,” said Kathryn Jaeger, a Jewel-Osco Certified Pharmacy Tech.

An overwhelming majority of the workers voted to join UFCW Local 431 despite an anti-union campaign from the employer. Workers were able to stick together despite the anti-union messaging thanks to meetings and face-to-face conversations with UFCW Local 431 members who are retail food workers in the same store. 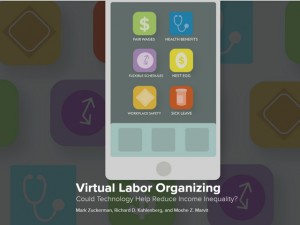 The Century Foundation has a new report suggesting that virtual labor organizing could be the key to getting a new generation of workers to join unions.

According to the report, “Organizing a union through the use of online tools would allow employees to band together in a more organic, grassroots effort that does not require outside help to get things started. The goal of virtual organizing would be to innovate and experiment with a new platform that is faster, homegrown, and simplified for workers to gain influence at work. Given how much today’s workers rely on information technology to do their jobs, there might be significant receptivity to this new online tool.”

The virtual online organizing tool would work through a new, state-of-the-art virtual platform that would allow average employees in workplaces across the country to organize and join a labor union with much more ease. A well-designed platform would avoid many of the roadblocks that employers often throw down when they see efforts to organize.

The platform would provide an interactive, step-by-step process so that employees know what to expect at each stage, and how to handle hurdles that may arise. It would be designed to help workers engage with other employees as well as form an organizing committee, create instructions for beginning and carrying on all facets of the organizing campaign, automatically file petitions and forms with the NLRB upon the show of sufficient support, and it would even offer model agreements on issues such as wages, benefits, scheduling policies, and health and retirement plans.