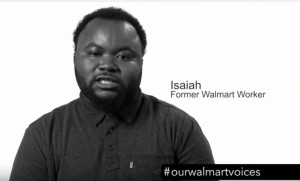 Last month, Making Change at Walmart aired ads during the first Democratic presidential debate with the purpose of bringing the struggles of Walmart workers and retail workers into America’s living rooms. The ads reached over 30 million people, got covered by national media outlets, and the #OurWalmartVoices hashtag was used by thousands on Twitter and Facebook.

In order to keep the issues facing America’s retail workers a centerpiece of the 2016 presidential campaign, the ads aired again during the second Democratic debate and Making Change at Walmart announced an “Are You With Us?” initiative that calls on all presidential candidates to tweet their support for Walmart and retail workers. The ads again were the most talked about of the debate and #OurWalmartVoices was a trending topic during the debate. Democratic candidate Bernie Sanders tweeted the ad, saying that Walmart “has gotta start paying living wages to their workers, not starvation wages.”