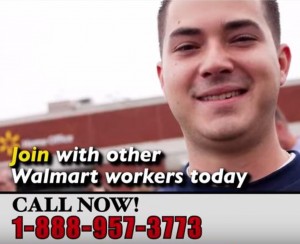 The Making Change at Walmart (MCAW)  campaign announced a new ad campaign for the week leading up to Labor Day. As part of this national effort, MCAW will be targeting more than 500,000 Walmart workers across the nation with television, print, and social media ads.

The multimedia campaign calls on Walmart employees who have experienced abuse at work to reach out to, “join with other Walmart workers today” and “change Walmart for the better.”

“Walmart workers are crucial in the fight to hold Walmart accountable,” said Jess Levin, communications director at MCAW. “No worker should have to experience discrimination, cut benefits, and denied overtime. This ad campaign will empower Walmart’s own employees to speak out against these abuses in the workplace. The ads and actions also set the tone in terms of how we will be going after Walmart for the rest of the year. Walmart should be concerned about what is to come.”

Stay tuned for a very important announcement…
Do you or your loved ones work for Walmart?
If you or family member has experienced abuse at work – you can hold this billion-dollar corporation accountable.
Past abuses include denying employees overtime, cutting healthcare benefits, and allegations of workplace discrimination.
Join with other Walmart workers today.
Speak out and help make a difference.
Call us now or visit HelpChangeWalmart.com
Working together, we will change Walmart for the better.

The television ad and print ad will air in the week leading up to Labor Day in multiple states. Facebook ads specifically targeted at Walmart employees will appear at the same time.

These ads will support on-the-ground actions taking place at Walmarts across the country. Activists and workers will be speaking to customers at stores and encouraging them to help in the campaign to make Walmart a better employer.