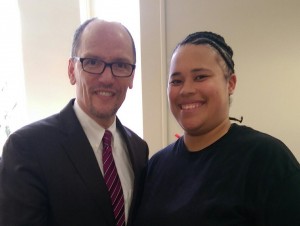 UFCW Local 21 member Ariana Davis and Secretary of Labor Tom Perez at the kickoff event of the “Lead on Leave – Empowering Working Families Across America Tour.”

Ariana Davis, a UFCW Local 21 member who works at Haggen, was featured in the kickoff event of the “Lead on Leave – Empowering Working Families Across America Tour” hosted by Secretary of Labor Tom Perez.

At a roundtable discussion with Secretary Perez, Ms. Davis joined a diverse group of local employers, workers, and community groups to discuss the demands of family and the importance of enacting state and federal paid leave laws.

“Even on a good week, we all stretch to make ends meet,” said Davis. “On a bad week, when we’re sick, we can’t afford to take unpaid time off so we get some Kleenex, drag ourselves out of bed, and come to work. This is unhealthy for coworkers, customers, and the communities we live in. This is not going to change unless we speak up and demand change.”Davis first became a UFCW member when she was 16. Now 25, she is a graduate of the UFCW GOLD Internship Program and an elected member of the UFCW Local 21 Executive Board.