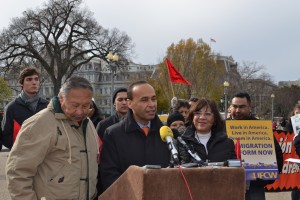 Rep. Luis Gutierrez alongside immigrant farm and food workers from across the country gathered in front of the White House for an immigration rally to remind Americans of the people behind the Thanksgiving meal, and express support for President Obama taking the most inclusive executive action possible.

On November 19, Rep. Luis Gutierrez (D-IL) gathered alongside immigrant farm, and food workers from across the country in front of the White House to remind Americans of the people behind the Thanksgiving meal, and express their support for President Obama taking the most inclusive executive action possible.  The event shined a special spotlight on UFCW members who presented an array of Thanksgiving foods harvested and processed by immigrant workers, including a turkey, potatoes, pumpkin, and other foods commonly found on America’s Thanksgiving tables.

Rep. Gutierrez said, “The President is going to act boldly, broadly and soon and across the country the bounty and blessings of Thanksgiving will be joyous.  The President’s actions will mean that millions of American families will not fear deportation and destruction and so many people contributing to our economy, including those who pick, pack and move the food to our tables, will be able to continue helping us all live better.”

In addition to the Thanksgiving table, farm workers delivered letters from across the country, explaining why administrative relief is so important to their families and communities.  Many of the letters included invitations to the President to share a Thanksgiving meal with farm workers in their homes.  (View the original letters in Spanish and their English translations).  One of the letters written by Jaime Sanchez, a fourth year college student and son of farm workers, appeared as an op-ed in his student paper at the University of Chicago–the President’s former place of work.

“The protracted political debates and the partial solutions offered by House Republicans that ignore the inconvenient truth that America’s food will continue to come to our tables through the toil and exploitation of undocumented farm workers who do the work that no one else is doing.  Instead of a seat at our nation’s table, farm workers live in the shadows where they are subjected to inhumane working conditions, rampant sexual harassment, wage theft and the threat of deportation if they dare to stand up for their humanity,” said Arturo Rodriguez, President of  United Farm Workers (UFW). “That’s why we are here at the White House, to share with America that we support the President taking the most inclusive executive action possible.  On this holiday of giving thanks, it’s time to give thanks to our Thanksgiving workers by simply extending to them meaningful action that says, ‘If you harvest our food, you’re welcome at the table.’”

International Vice President and Director of Civil Rights and the Community Action Department Esther Lopez added, “In the face of cowardly inaction by the House Republican leadership,  we ask President Obama to do what he should have done long ago – use his clearly defined legal authority to provide relief to immigrant workers and their families. We ask the President to put in place a framework that ensures immigrant workers are treated with dignity and respect on the job.”

Their sentiments were bolstered by a chorus of farm and food workers from across the country.

Said Maria G. Lozano Ramirez, a grape harvester from Benson City, Wash., “Wine is important to Thanksgiving dinner, but people drink it without thinking about how much work it takes to make that one bottle of wine. How many undocumented farm workers did it take to make it taste so good? We work long hours but without much acknowledgement.”

Pumpkin grower Maria Martha Acevedo Cardenas from Sunnyside, Wash., recalled the sacrifices behind every Thanksgiving meal, saying, “I’m not asking for pity, but I am asking for what’s fair. Farm workers need immigration reform.  They’re able to eat the best produce, while we are unable to afford the same fruits and vegetables we picked. One day, I would like to be able to buy my own Thanksgiving turkey.”

Added her U.S. citizen daughter, Eustalia (Toy) A. Acevedo, who picks apples in Seattle, Wash., “When the average American eats that apple pie or a dish with apples on Thanksgiving, they need to realize without farm workers picking their fruits or vegetables there wouldn’t be a Thanksgiving meal.”

San Juanita Marquez, a poultry processing plant worker from Lumber Bridge, N.C. and member of UFCW Local 1208, explained the perils of life as an undocumented worker: “If immigration comes to the plant or my house, I could be separated from my children. My youngest children are American citizens, and because I have no family here, they would be left alone and be sent to foster care if I was deported. It would be too dangerous to take them back to Guerrero where children and the elderly are gunned down in gang violence. I ask Obama to stop the deportations – let us work and let us keep our children safe.”

Juan and Maria Pacheco from UFCW Local 1776, achieved American citizenship after years of working at a turkey processing plant in Mifflintown, Pa.  Today they called for executive action on behalf of their undocumented coworkers.  Said Juan, “Families all across the country are going to be eating our turkeys next week, but they don’t know the stories behind their Thanksgiving dinner. My wife and I worked in the Empire Kosher turkey plant for fifteen years before we finally earned American citizenship. We have worked hard to earn our American Dream. This Thanksgiving, President Obama has the chance to give that same opportunity to other hardworking families like ours.” 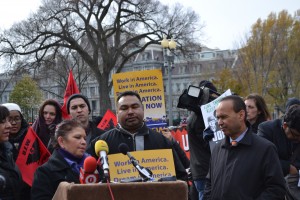