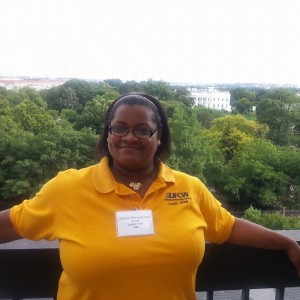 YWAC is comprised of 30 young workers from various AFL-CIO affiliate unions across the United States. The purpose of YWAC is to foster dialogue among young workers who are active in the labor movement, with the hope of creating resources and programs that make it easier for other young workers to become involved.

Two weeks ago, Clemmons completed the inaugural GOLD internship program. She worked on the action project in Chicago which delivered 25,000 signatures in support of paid sick leave to Mayor Emanuel.

As co-chair, she hopes to foster more communication between established young worker programs so that the best and most effective ideas can be easily shared. At home in Ohio, she plans to build a young workers group that both her local union and her community can turn to.

“I’m excited to begin,” Clemmons said. “Through GOLD and my week in D.C. with YWAC I realized that a lot of young members want to be more involved, but don’t always know how to be. My goal is to change that.”