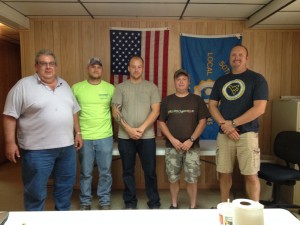 Lance Heasley is a former steward and member-activist with UFCW Local 45C and works as an instrument technician at Axiall, where he and his fellow union members make chlorine and other caustic chemicals. Many of them, including Lance, live side-by-side with workers at the CertainTeed and know each other socially. So, when Lance heard his friends and neighbors talk about how hard it could be working at CertainTeed, he started talking to them about the difference a union could make.

He began to go out of his way to have conversations with CertainTeed workers and slowly built a committee of interested workers. He reached out to the ICWUC organizing department and worked with them to sign up CertainTeed workers on authorization cards. Workers began texting and calling each other, holding meetings and forming a Facebook group to talk about the need for a union at CertainTeed. One of those workers was Carl Sweeney.

One of the major issues for Carl was being able to speak up and speak out without fear of retaliation. “I wanted to go to work every day and not worry about what I said or if I’d be the next one out because someone didn’t like me,” said Carl. “I wanted to speak up when I saw something unsafe and know the problem would be fixed, not seeing me as the problem for bringing it up.”

As soon as the CertainTeed workers filed with the National Labor Relations Board for an election, the company brought in an anti-union law firm and began holding mandatory anti-union meetings and one-on-one sessions to persuade workers to back down. But they stood strong and stayed united, despite company attempts at intimidation.

“I knew I could lose my job, but I also knew something had to change,” said Carl. “We had to stick together, stay united, to make CertainTeed a better place to work.”

That work paid off and Carl and his coworkers are looking forward to addressing their concerns at the bargaining table – including rapidly rising healthcare costs, favoritism, and safety concerns in the workplace.