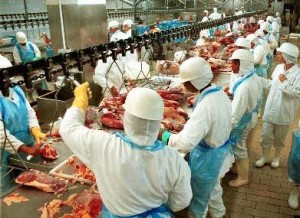 Workers at the JBS beef slaughter and processing facility in Grand Island, Nebraska, who belong to United Food and Commercial Workers Union Local 293 ratified a new contract on Thursday, July 17. The new five-year agreement will cover more than 2,600 workers and will go into effect today.

“This new contract is great for our members and the local economy,” said Dan Hoppes, President of UFCW Local 293. “Thanks to support and unity of UFCW union members from across the country, we were able to negotiate a contract that raises the bar for workers in this industry. Workers will earn higher wages and a healthcare plan that benefits workers, their families, and the company.”

The UFCW represents JBS workers at several other locations around the country. Workers have ratified contracts in Worthington, Minnesota, and have reached a tentative agreement in Greeley, Colorado. Contract negotiations are ongoing in Souderton, Pennsylvania, and Louisville, Kentucky. Workers in Omaha, Nebraska will begin negotiations in the coming months.