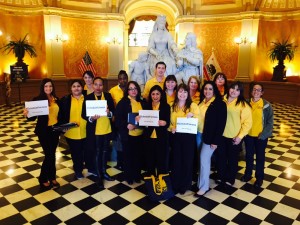 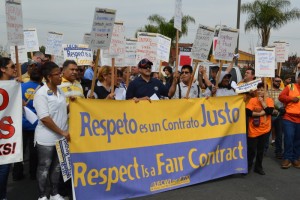 Union members, clergy and more than 100 community groups gathered for a rally in support of UFCW members who are fighting for a fair contract at El Super grocery stores in southern California

Today, union members, clergy and more than 100 community groups gathered for an Ash Wednesday rally in support of UFCW members who are fighting for a fair contract at El Super grocery stores in southern California. Six hundred UFCW members have been working without a contract since September, 2013. In response to the company’s steadfast refusal to provide their employees with a fair contract, union El Super workers have called for a consumer boycott of the grocery chain.

Unfortunately, rather than working cooperatively to meet their employees’ needs, El Super focused its efforts on persuading union members to vote out their union. The company held captive audience meetings conducted by El Super CEO Carlos A. Smith, pushing a decertification vote. The workers were not fooled. On December 12, 2014 they voted – by a more than 3-1 majority – in favor of their union.

After the recertification vote, the workers promptly asked the company to return to the bargaining table. El Super ignored, and then rejected that request. El Super’s actions, and its steadfast refusal to address the workers’ priorities, led to the call for a consumer boycott of all El Super markets on December 20, 2014.

The boycott will continue until El Super workers achieve their core goal of winning respect and a fair contract.

To show your support for a fair contract for El Super workers, please visit www.boycottelsuper.org.