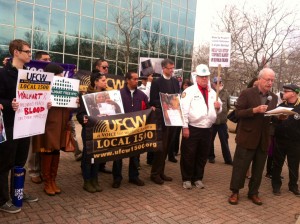 Leading up to the Global Day of Action for the Rana Plaza disaster in Bangladesh on April 24, UFCW Locals 888 and 1500 held an
action to call on retailers to do more to help the victims of the
factory disasters.

Making Change at Walmart is joining Jobs with Justice, the International Labor Rights Forum, and community allies from around the world on April 24, in a day of action to stand in solidarity with garment workers in Bangladesh. One year after the Rana Plaza building collapse killed at least 1,138 people and injured more than 2,500 in the worst garment industry catastrophe in history, concerned citizens around the world will demand that Walmart and other apparel brands and retailers pay full and fair compensation to the victims of the Rana Plaza collapse.

The day of action will call on Walmart and other retailers to take responsibility and to pay their fair share of compensation to the survivors and families who lost loved-ones.

The action will also call on Walmart to pay compensation to the victims of the Tazreen factory fire, which took place on November 24, 2012, and where Walmart was the largest purchaser. The fire killed 112 workers and was the deadliest fire in the Bangladesh garment industry.

Demonstrations will take place at Walmart stores around the country. For more information, visit www.walmartdeathtraps.com.

Locals can participate in the Global Day of Action by:

1. Organizing or joining a demonstration at a Walmart store near you. Visit www.walmartdeathtraps.com and
http://bit.ly/RanaAction closer to the date for action listings.

3. Locals can send an e-blast about the Global Day of Action, asking supporters to join an action and spread the message on social media. For more information, email Liana Foxvog at International Labor Rights Forum at liana@ilrf.org.

Locals can also start taking action before April 24 by using the materials from the Jobs with Justice toolkit that can be downloaded from http://bit.ly/April24Kit.

UFCW Locals 888 and 1500 held an action with Rana Plaza survivor Aklima Khanam and community allies in New Jersey last week. The crowd of more than 50 people protested in front of Children’s Place retail headquarters and Walmart stores in hopes of bringing attention to the horrific working conditions and ask that these companies do more to help the victims. A video of the action can be viewed at http://bit.ly/NJVideo.