After a forty-year relationship, no one expected big changes to come out of the latest contract with Century 21, a retail chain with 2,500 workers based out of New York. But if management didn’t see the changes coming, they underestimated the solidarity of the chain’s workers.

Workers at Century 21 radically reset their relationship with the company by launching an internal organizing campaign to build worker power inside the stores ahead of a bargaining session last month. The workers started C21 United, a worker campaign to unite long-term and new store workers over the issue of a new scheduling system that was disrupting workers’ traditional schedules and impacting their families.

After forty years of maintaining set schedules for full-time workers, the company instituted a new scheduling system that led to erratic schedules. Workers started being assigned fewer hours or late-night shifts, regardless of seniority. When the company refused to bargain with workers over the drastic change to scheduling policy, UFCW Local 888 filed an unfair labor practice charge against the company.

Meanwhile, inside the store, workers began reaching out to one another to bridge divisions between full-time and part-time staff. The workers signed pledge cards to show their unity, and participated in store actions. In May, members of the bargaining committee, accompanied by Local 888 President Max Bruny, did a store walkthrough of the flagship Manhattan store to discuss the scheduling problems with coworkers. The Director of Stores challenged the worker’s right to wear their UFCW gold during the walkthrough, and called security, threatening the committee with eviction. But store workers stood up for their rights, and the director backed down. The committee members and President Bruny were able to continue their march through all six floors of the store, openly discussing workplace concerns with members on the sales floor.

When workers finally brought Century 21 management to the bargaining table, they negotiated from a position of strength. Workers bargained for scheduling language for the first time in forty years. Long-term employees have returned to the fixed schedules that their families have relied on for decades. The workers also guaranteed continued coverage for their health insurance plans in the wake of changes caused by the Affordable Care Act. Workers will see raises over the life of this contract, and won an important moral victory by ending the practice of publicly patting down workers before they leave the store.

“I have been here for 35 years and this is the best contract I have ever seen,” said Carmen Fernandez, a shop steward in the flagship store, and member of the bargaining committee. “This proves where there is unity, there is strength.”

“I am proud to say that I am a UFCW local 888 member that helped negotiate a contract that all c21 employees deserve,” said Shamika Bracey, a member of the bargaining committee. 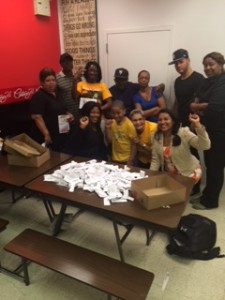 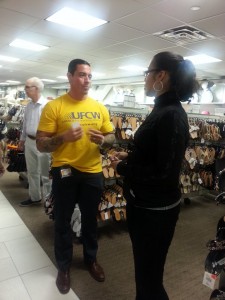