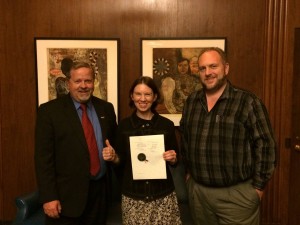 UFCW Local 555 shop steward Sarah DeMerritt holds a signed copy of SB1546, that eases the penalty for people who unknowingly or inadvertently sell alcohol to a minor for the first time.

UFCW Local 555 members celebrate Oregon Governor John Kitzhaber signing SB1546 into law. The law eases the penalties for the unintentional sale of alcohol to a minor from a misdemeanor to a Class A violation. This bill was the focus of UFCW Local 555’s Lobby Day in February.

UFCW Local 555 shop steward Sarah DeMerritt testified before the Senate Judiciary Committee in support of legislation that would lessen the charges for those who unknowingly or inadvertently sell alcohol to a minor for the first time.

In June of 2013, while working as a checker at Safeway in Lake Oswego, Oregon, she sold a six-pack of beer to someone she believed was of legal drinking age. But instead the customer was part of an Oregon Liquor Control Commission sting. A police officer interviewed and cited DeMerritt in her check stand as customers looked on.

Despite having more than 12 years on the job and no previous offenses, DeMerritt was fired and charged with a Class A misdemeanor. DeMerritt stressed that she takes her responsibility to keep alcohol out of the hands of minors very seriously and had passed all previous stings. Senate Bill 1546 will now make penalties for first time offenders more proportional.