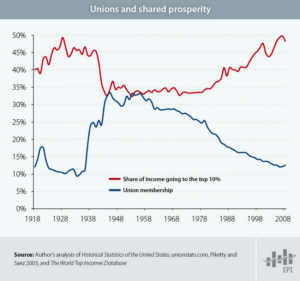 Intergenerational social mobility is strongly linked to union membership, according to a working paper from the National Bureau of Economic Research, a non-profit research organization.

In addition, the paper found union children achieve higher levels of education and better health status than non-union children. The paper, a version of which was presented recently at the liberal Center for American Progress, attributed the difference to “the union wage premium raising parental income” and to the “intergenerational transmission of union status.”

The paper also found that offspring from communities with high union density earned more money compared to their parents than offspring from areas with lower union density. The authors attribute this finding to “spillover effects of unionism,” indicating unions tend to advocate for policies that benefit non-union and union members, including raising the minimum wage, increasing education spending and improving public services.