Posts Tagged: “Give America a Raise”

"Give America a Raise", Americans United for Change, OUR Walmart 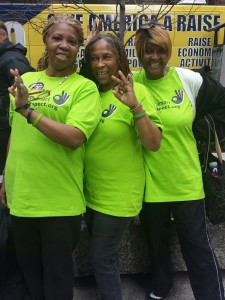 The “Give America a Raise” bus tour continued in Illinois where UFCW
members and community allies
advocated to raise the minimum wage.

Last week, UFCW members joined local elected officials, labor and faith leaders, U.S. Senator Dick Durbin, OUR Walmart, and other low-wage workers in Chicago as part of the “Give America a Raise” bus tour. The bus tour, launched by Americans United for Change, is an 11-state tour to urge Republicans in Congress to raise the minimum wage to $10.10. Rose Campbell, a Walmart employee and OUR Walmart leader, spoke at a rally in Chicago about Walmart worker’s struggle to make ends meet while earning a Walmart poverty wage.

“Americans agree that no one who works should live in poverty, yet the reality is that workers around the country earning minimum wage are living below the poverty line,” Campbell said. “It’s long past time for Congress to give America a raise.”

Since 2009, the federal minimum wage has remained the same but the of price of food, gas, utilities, and basic necessities have dramatically increase due to economic inflation, making it nearly impossible to get by anywhere in America on $7.25 an hour or $15,000 a year.

A recent Public Policy Polling survey found that 63 percent of Illinois voters support raising the minimum wage to $10 – while only 33 percent are opposed – and by 11 point spread that they’re less likely to vote for Senator Mark Kirk again if he opposes it.

A new report out from Center for American Progress Action Fund finds that raising the minimum wage would increase wages for 1,127,000 workers in Illinois by more than $1.3 billion if the minimum wage is raised to $10.10, and it would generate more than $860 million of economic activity in the state.

"Give America a Raise"

Since 2009, the price of food, gas, utilities, and basic necessities has been rising. In that same period of time, the federal minimum wage has stayed exactly the same. Because of this, workers across the country are struggling now more than ever to make ends meet. $7.25 an hour simply isn’t enough. It’s time for Congress to give America a raise to $10.10.

The “Give America a Raise” bus tour will be traveling through ten states to call on Congress to raise the minimum wage.

Several tour stops will take place outside the offices of members of Congress who are opposing a minimum wage increase and will feature high profile speakers, including U.S. Senators, candidates for statewide office, Secretary of Labor Tom Perez, and AFL-CIO President Richard Trumka.

For more information and to get involved at a tour stop near you, go to www.raiseto1010.com.