UFCW President Perrone: “We Will End LGBTQ Discrimination in the Workplace” 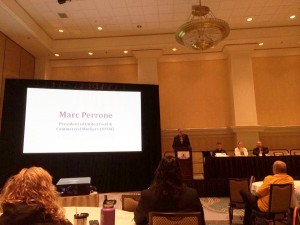 On August 27, UFCW International President Marc Perrone addressed LGBTQ union members at the AFL-CIO Pride at Work conference in Orlando, Fla. The UFCW was the first labor union to endorse the Employment Non-Discrimination Act (ENDA), legislation that would prohibit discrimination in hiring and employment on the basis of sexual orientation or gender identity. The UFCW also implemented a policy of including gender reassignment surgery as part of a comprehensive Health and Welfare plan for union employees:

“Even though we are celebrating marriage equality this summer, too many LGBTQ workers still endure discrimination in workplaces that are far from equal. Today, in 29 states, it is still legal to fire a worker on the basis of their sexual orientation. In 33 states, a worker can be fired for being transgendered.

“Right now, the only way for these workers to gain the protection at work that we all deserve is through a union contract.

“In this spirit, I am proud to say that as part of our long commitment to equality for all workers, the UFCW is changing our Health and Welfare plan to include gender reassignment surgery. While this is a change that should have been made long ago, it is a change that I am proud of.

“The UFCW is committed to putting an end to discrimination in the workplace. We will stand up, speak out and fight for what is right when companies disregard the value of hard-working men and women, based on whom they may love or who they are.”

UFCW OUTreach Meets with Congressman to Discuss the Importance of ENDA 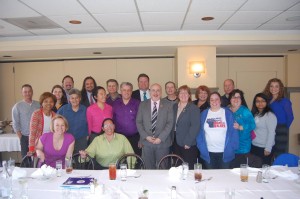 UFCW OUTreach executive board members met with Congressman Mark Pocan (D-WI), where they talked about the importance of the Employment Non-Discrimination Act (ENDA) and UFCW OUTreach’s commitment to fight for its passage.