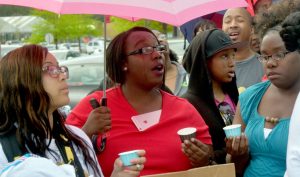 On April 21, Making Change at Walmart and members of UFCW Local 1996 joined the Atlanta Labor Council, Atlanta Jobs With Justice and Georgia House Representative Dewey McClain at a candlelight vigil in front of the Walmart Supercenter in Lilburn, Georgia, in honor of J.D. Ferguson. Mr. Ferguson, a 25-year-old Walmart loss prevention officer and father of three young children, was shot and killed trying to stop a shoplifter from stealing three televisions on Sunday, April 10. During the event, the groups presented Walmart management with a bulletproof vest to demonstrate how Mr. Ferguson’s life could have been saved.

“The Walton family owns more wealth than 40 percent of all Americans combined,” Rep. McClain said. “However, they can’t invest $75 in a vest to try to help their loss prevention officer be safe. If there was a union here at Walmart, the first priority would be safety.”