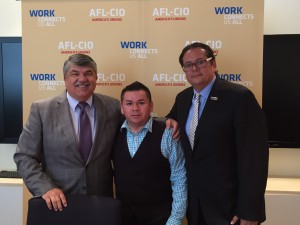 Fermín Rodriguez is a member of UFCW Local 770, and works at El Super–a California-based, Mexican owned supermarket chain. Fermín had worked for El Super for nine years, until the company illegally terminated him, simply for standing up for workers’ rights.  The company tried to silence him due to his union activity, and the union’s charges lead the National Labor Relations Board (NLRB) to obtain a court injunction that ordered the grocer to return Fermin to work.

Since September, 2013, Fermin and his fellow workers had been working without a contract because El Super refused to bargain with them even after the workers fought off the company’s decertification attempt to take away their Local 770 union representation. In response, the workers launched a boycott to protest the company’s unfair labor practices at their store. Since then, workers like Fermin have continued to speak up about what the company is doing, and have gained support from other workers and community members from far and wide.

In late July, Federal Distict Court Judge George King granted the National Labor Relations Board’s (NLRB) request for a rare “10j” injunction to stop El Super’s unfair labor practices and immediately remedy their unlawful treatment of workers. In the face of El Super’s coercive and threatening conduct designed to silence workers, Chief Judge George H. King issued the significant “10j” injunction, ordering not only the immediate reinstatement of Fermín, but the restoration of workers accrued vacation which El Super had taken away. The company also conceded in the face of these actions that it would return to the bargaining table.

Fermín is proud of this victory but is clear that this fight isn’t just about him–“it’s about respect for all workers and basic protections on the job. The ability to take sick leave when we or a family member is ill; a fair wage that reflects our contribution to the company’s giant profits; and guaranteed full-time hours for those willing to work.”

To speak out about how he and his coworkers are engaged in a campaign to stand up for worker rights, Fermín came to Washinton, D.C. last week to #StartTheConvo at the White House Summit on worker voices.

At the summit Fermín stressed, “Don’t let yourself be exploited. Fight for your rights. Join a union. Unions are there to protect all workers from exploitation and ensure that employers respect workers’ rights.”

Fermín also used the opportunity to discuss how unions are at the forefront of fighting for immigrant workers’ rights. “It is imperative for workers to realize that they shouldn’t be afraid and know that they have rights. Regardless of whether workers are documented or undocumented, the union is here to help all workers. It is important to know that we, Latino workers, come to this country to work hard, contribute to the economy of this country, and fight to better the lives of our families. It is important for this to be taken into account and finally pass immigration reform.”

In his remarks, Fermín also touched on the significance of Hispanic Heritage Month, and what it means to him: “It is an honor and gives me a sense of pride in my work and my contribution. Latinos come to the USA to improve our living standards and to help our families here and back home. Whether we are from Mexico or other countries in Central America, Hispanic Heritage Month is important to us because we come here to work hard, not only for ourselves but to help this country as well.”