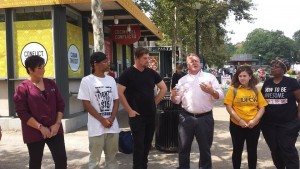 Workers at Conflict Kitchen in Pittsburgh stood together and signed authorization cards to have a union voice on the job and join UFCW Local 23.

Conflict Kitchen is a counter-service restaurant in downtown owned by Carnegie-Mellon University (CMU).  It is an art project/restaurant that serves cuisine from a country that is currently going through some kind of conflict with the U.S.

Because an overwhelming majority of workers supported joining a union, CMU recognized the unit and agreed to meet at the bargaining table without a separate election.

“We are thrilled to be organizing. We think it is important to use our visibility to help the fight for other service workers,” said Conflict Kitchen employee Quinton Steele. The group was inspired by the victory of New York City fast-food workers to earn $15 an hour.

Steele also said that workers at the restaurant started the process to form a union just weeks before and that they were elated to see it come to fruition in such a short period of time.