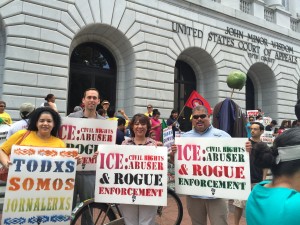 In the midst of an ongoing legal battle that has suspended President Obama’s executive actions on immigration, members of Congress, labor leaders, and immigrant families gathered in New Orleans last week to demand implementation of the president’s immigration orders. The deferred action programs, which would have provided immigration relief for more than five million workers, have been suspended due to a lawsuit spearheaded by anti-immigrant governors and attorneys generals.

Minutes after the Fifth Circuit Court of Appeals in New Orleans finished listening to the oral arguments of the case, UFCW joined immigrant workers, Representatives Luis Gutiérrez (D-IL) and Raúl Grijalva (D-AZ), and immigrants’ rights groups at a rally outside the courthouse. At the rally, UFCW Executive Vice President Esther López made the following statement.

“President Obama’s executive actions on immigration are about taking a step forward, however modest, in the fight to fix our broken immigration system. It is about millions of workers applying for legal rights and earning long overdue peace of mind. Unfortunately, DAPA remains in limbo. And for that we say to the politicians who have held it up—shame on you. Shame on you for letting ideology and indifference get in the way of good public policy.

“The president’s executive actions are not a substitute for comprehensive reform, but they are legal, necessary, and overdue. The lawsuits against these actions are obvious political stunts – a cruel effort to scare immigrant workers away from applying for DAPA.