“Making Change at Walmart,” has announced its first national ad campaign of 2015. The new ad campaign (which includes TV, print, and social media ads) highlights Walmart’s avoidance of American taxes through offshore tax shelters, and the fact that the average Walmart worker earns one thousand times less than Walmart’s CEO. 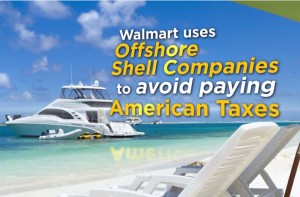 The TV ad campaign, entitled “Hot Dogs,” began airing on June 28th during morning shows in Washington, D.C. It aired in 10 additional cities and will take Walmart to task for using tax havens in multiple countries to avoid paying its fair share of American taxes.

It specifically cites a recent report from Americans for Tax Fairness detailing how the retailer has placed at least $76 billion worth of assets in subsidiaries located in 15 overseas tax havens, including Luxembourg, the Cayman Islands, and Barbados. 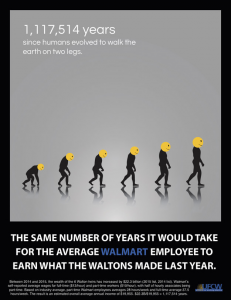 As part of the campaign to highlight Walmart’s failure to change, the print ad, entitled “Devolution,” will additionally run in the Bentonville market, Washington, D.C., as well as the St. Louis region – which includes cities in Missouri, Arkansas, and Illinois. The ad makes it clear that it would take the average Walmart worker 1,117,514 years to earn what the Waltons did last year, pointing out that this is the same number of years it took humans to evolve to walk on two legs.