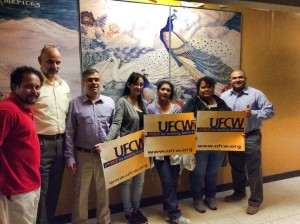 Workers at a Bestway Supermarket ratified their first union contract after a hard fought organizing campaign in Virginia. The workers, members of UFCW Local 400, ratified a four-year contract that secures paid vacation for the first time at Bestway, and a series of raises over the lifetime of the contract.

The workers at the Falls Church, Va., Bestway store first formed their union in September, 2013. But rather than recognize the union, the company engaged in systematic illegal retaliation against union supporters by cutting hours, changing schedules, holding one-on-one interrogation meetings, and threatening to call immigration on the workers, among other scare tactics. When workers refused to back down and staged a one day strike, Bestway fired thirty-one workers, an action that violated national labor laws.

With support from their union and customers, the workers won their jobs back and forced Bestway to recognize and bargain with their union. Along with their first contract, the Bestway workers have secured a settlement for the illegally fired workers, awarding financial compensation for lost wages. Other workers who were pushed out or left to find more regular hours have won the right to return to their jobs at the store.

“This has always been about respect and dignity on the job,” said Nerida Castro, a Bestway worker whose two daughters walked the picket line with her. “My girls saw the power people can have when we stand together for what’s right. I did this for them.”