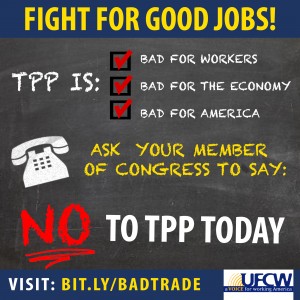 This week, the U.S. House and Senate will both begin considering “Fast Track” legislation to expedite passage of a bad trade deal called the Trans-Pacific Partnership (TPP). “Fast Track” has been used in the past to push through some of the nation’s worst trade agreements. It is a wholly undemocratic process that would prevent Congress from considering any pro-worker amendments to a pending trade agreement. For too long, trade policies have padded the profits of big corporations while driving down wages and standards for American workers. The TPP is more of the same.

The TPP trade deal has been put together in secret. Hundreds of corporate lawyers and other special interest groups have been advising the U.S. Trade Representative, but the voices of hard-working families have been left out.

Fast tracking the TPP will rush America into more trade agreements that fail working families. It is imperative for UFCW members to stand up and speak out against “Fast Track” legislation and the TPP to their Members of Congress.

The communications materials below provide several ways your local union and your members can speak our against “Fast Track” and the TPP.

One Response to “Fighting “Fast Track” and Bad Trade Deals”