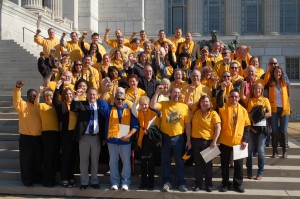 Members of UFCW Locals 2, 88, and 655 gathered for a Lobby Day at the State Capitol in Jefferson City to tell their legislators that right-to-work is wrong for Missouri.

On March 11, members of UFCW Locals 2, 88, and 655 gathered for a Lobby Day at the State Capitol in Jefferson City to tell their legislators that right-to-work is wrong for Missouri. Members spoke of how right-to-work would lower wages and standards while leaving working families worse off.

A day prior, two members of UFCW Local 655 gave heartfelt testimony before a Senate committee in opposition to the legislation.

“I am taking a day away from my family and job because I believe right-to-work is wrong for Missouri,” said Lori Giannini, a ten year veteran of UFCW Local 655 who works at Schnucks. “I’m not a politician, union leader or public speaker. I am a worker. I am a worker represented by a union of workers and I am very concerned that the right-to-work legislation will do away with that representation. When management can make rules to their advantage–my small lone voice of concern will not be heard.”

“I own my home,” said 12-year UFCW Local 655 member Theresa Hester who works at Shop ‘n Save. “And I am off government assistance. All this while being a member of UFCW Local 655. I know personally what a union can do for hardworking families.  Right-to-work threatens to take that away.”

Jackie Mayer, a member of UFCW Local 88 who works at Shop ‘n Save, said it was important for legislators to meet with regular working people. “They need to hear our voice,” she said. “Right-to-work would hurt all workers in Missouri, union and non-union alike.”

UFCW members have successfully staved off right-to-work in Missouri for the last five years. They said as long as the bill continues to be introduced, they will be at the Capitol lobbying. 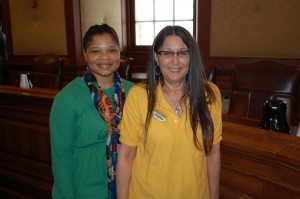 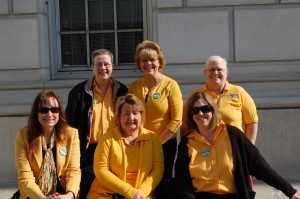