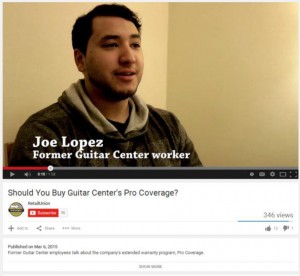 A new video features former Guitar Center workers speaking out against a company policy that cuts workers’ hours if they don’t sell a certain amount of extended warranty policies to customers.

Over the past two years, workers at Guitar Center stores across the country have voted to join the RWDSU. The company responded to workers wanting to have a union voice on the job with an aggressive anti-union campaign and hired high profile “union avoidance” law firm Jackson Lewis in their efforts. The National Labor Relations Board is currently investigating numerous unfair labor practice charges.

Recently, former workers from the Central Chicago store spoke out against the practice of pushing Guitar Center’s extended warranty “Pro Coverage” on their customers. Guitar Center demands that workers sell Pro Coverage on at least 30% of their sales or they can get their hours cut. Help support Guitar Center workers and spread the word by sharing the video on Facebook.