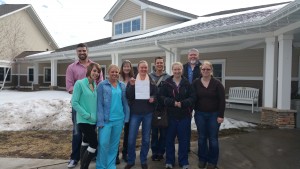 Healthcare workers at United Pioneer Home in Luck, Wis., voted “Union Yes” in an election conducted by the National Labor Relations Board. Workers showed their strong support for having a union voice and joined UFCW Local 1189. Dignity, respect, and a voice on the job were among the reasons the workers felt they needed to belong to a union.

United Pioneer Home workers Rachael Schmid and Heidi Swanson said, “We’re excited to have a voice. When we tried to speak up to make our workplace better, our voices would go unheard and the home’s board of directors would speak for us. This was a problem because they wouldn’t listen to us and they didn’t understand the changes we needed.”

“I’m looking forward to having respect and dignity on the job,” said Sam Everson, who also works at United Pioneer Home.

United Pioneer Home is a retirement home that provides long-term care and housing to senior citizens in the Luck, Wis., community.