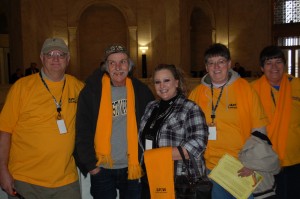 Senate Majority Leader Mitch Carmichael announced this weekend that the push to make West Virginia a right-to-work state is dead.

Two weeks ago, more than 100 members from UFCW Locals 23 and 400 spoke to dozens of state senators at the Capitol in Charleston about the harmful effects of right-to-work.

Bruce Felton, a UFCW Local 400 member who works at Kroger in Morgantown, W. Va., said this as he left the Capitol after UFCW’s lobby day: “I spoke with a lot of legislators today and I told them that I wish they would stop hurting workers and start building up the middle class and create good jobs that allow people to support their families. There are a lot of jobs in West Virginia, but they’re all low-wage with no benefits. People should make enough to support their family.”

It is clear that conversations with Bruce and other UFCW members made an impact. Despite a Republican majority, the West Virginia Senate bucked the wishes of big corporations and sided with hard working families.