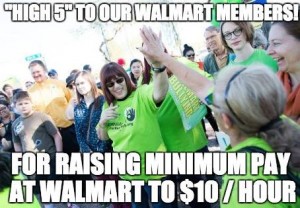 Last Thursday, Walmart announced that it would raise wages for all hourly employees to $9 an hour by April and $10 an hour by next year. The move comes after public pressure on the company, hitting an all-time high following the largest Black Friday strikes and protests in company history.

“Because of a strong and organized movement that includes many UFCW members, half a million Walmart workers will now get a raise,” said UFCW International President Marc Perrone. “Because workers spoke out, $1 billion will now go directly into our economy instead of onto the Walton family’s balance sheet.”

After 50 years of touting a low-wage business model, this move has widely been hailed as a response to worker pressure.

“We are so proud that by standing together we won raises for 500,000 Walmart workers,” said Florida OUR a Walmart member Emily Wells. “We know this wouldn’t have happened without our work to stand together with hundreds of thousands of supporters to change the world’s largest private employer.”

Workers say, however, that it still fails to address many of their concerns about getting enough hours to pay their bills, respect in the workplace and freedom to speak up without fear of retaliation. As the New York Times Editorial Board wrote, “A hugely profitable corporation like Walmart can readily afford to do better than those measly increases.”

Workers agree and plan to continue standing up for $15 an hour, full-time hours and respect on the job. You can show your support by signing their petition at action.changewalmart.org/For15

One Response to “Walmart Strikers Win Raise for 500,000 Workers”