Black History Month: The #MoralMonday Movement and the Legacy of Selma 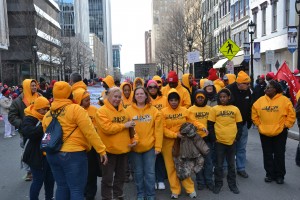 UFCW Local 1208 members participated in the “Moral March for Love and Justice” in Raleigh on Valentine’s Day.

This year marks the 50th anniversary of the historic civil rights march from Selma to Montgomery, Alabama. A diverse group of marchers walked to demand that the state of Alabama uphold the 15th Amendment to the Constitution, which granted the right to vote to African Americans.

In recent years, North Carolina state lawmakers consistently tried to undermine the economic mobility of poor and working people by cutting the Earned Income Tax credit, cutting unemployment benefits, and by blocking access to healthcare for thousands of North Carolinians. Fed up with these lawmakers, concerned citizens and community members mobilized to fight back and Moral Mondays were born. The Moral Mondays movement involves a diverse group of people and organizations who gather in weekly demonstrations at the North Carolina Capitol. They come to defend the rights of all people—to stop the discriminatory creation of barriers to the ballot, to protect funding for education and Medicaid, to jumpstart stagnant wages, and continue the fight for racial justice. These non-violent protestors continue the tradition of direct action and civil disobedience that activists like Dr. Martin Luther King stood so strongly for in the 60’s, and continually face arrest and jail time.

One such Moral Monday event last year brought together a coalition of more 160 organizations and thousands of people in what was the largest protest gathering in the South since the Selma march. Since then, the movement has spread to other cities in the state and across the country.

In North Carolina, activists have seen victories as a result of their collective action. Some of those victories include a pay increase for public school teachers and the blocking of an unconstitutional school voucher program. Some state officials, including Gov. Pat McCrory, are backpedaling from their hardline stance against Medicaid expansion. Raleigh’s District Attorney dismissed the charges against 941 protesters who were arrested for their acts of civil disobedience inside the General Assembly last year. But there is a long way to go because Republican lawmakers are still trying to pass laws that end up hurting the sick, the poor, and minorities.

Most recently, a “Moral March for Love and Justice” was held in Raleigh on Valentine’s Day. The march was attended by UFCW Local 1208 members and veteran moral marchers like the Reverend William Barber, a member of the national Board of the NAACP.

Over the past week, we have seen how collective action can really pay off. On Friday, UFCW International President Marc Perrone made a public statement following the news from Walmart that it would be raising its wage base: “This is not an act of corporate benevolence. It would not have been possible without the courage of countless workers who are standing together, taking risks, and demanding wages and schedules that can support their families. Walmart is responding directly to calls from workers and their allies to pay a living wage.”

It takes bravery, dedication, and resilience to stand up to those who try to assert unjust power over us, but activists like the Walmart workers who won a wage increase this week, community supporters who helped make it happen, and civil rights activists from the 1960’s through today show us time and time again that when we stand together, we are powerful.