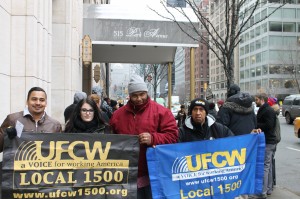 Protesters in New York call on Walmart to hold managers accountable for their actions against workers who take action for change.

Last Wednesday, workers and community members gathered to call on Walmart to either adhere to the company’s publicly stated anti-retaliation policy by punishing managers who target workers, or admit that it supports these anti-worker actions by managers. There were a total of 17 actions in 14 different states. OUR Walmart members filed more than 35 additional unfair labor practice charges with the National Labor Relations Board over retaliation against workers who took action last Black Friday season.

Walmart workers have made big strides toward improving the company where they work over the last year. Their actions have resulted in an improved pregnancy policy, an overhauled scheduling system, and the promise of a raise for the lowest paid workers at Walmart. Yet for too many workers, these victories have come at a price. While Walmart publicly states that it has a strict anti-retaliation policy, those who stood up for their rights last Black Friday season are facing disciplinary actions, unfair treatment, and even termination.

Kiana Howard is a single mom who has been trying to get a regular schedule so that she can support her son. Instead, she and her co-workers were illegally fired and disciplined for going on strike to end to this very kind of retaliation. She joined with OUR Walmart members across the country to challenge the company and her manager. The organization launched a “Wild West or Walmart Policy” page online, featuring the managers who have illegally targeted workers for exercising their rights. You can see their website and join more than 18,000 other supporters by signing their petition here. 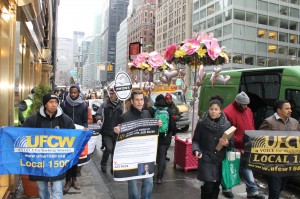