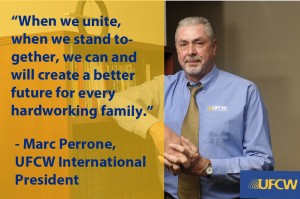 “The choice we face today is whether we will stand together and build an economy that lifts up all families, or watch as even more workers fall further behind and struggle to make ends meet,” Perrone said. “Cynics may believe that these divisions and inequities are irreversible. I do not. We, as a union, do not. I strongly believe that by uniting together we can give workers across North America the opportunities they deserve.”

Perrone will spend the coming weeks and months meeting with UFCW members throughout the United States and Canada. As part of this listening tour, Perrone is planning one on one conversations with members, worksite visits, and the utilization of digital and social media platforms to engage with union members to hear their thoughts and ideas on how the UFCW can grow even stronger.

“Even in the face of unprecedented challenges, Joe Hansen never lost sight of our members,” Perrone said. “His commitment and dedication to the hard-working men and women we represent will never be forgotten.”

One Response to “Marc Perrone Elected International President of UFCW”