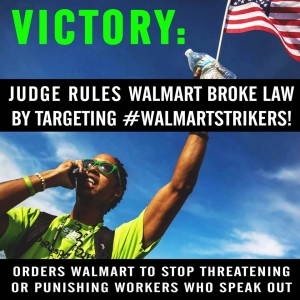 A National Labor Relations Board Administrative Law Judge has issued a sweeping decision against Walmart for its illegal actions against workers at two California stores. The judge is ordering Walmart to immediately stop making intimidating comments to workers who are part of OUR Walmart.  Six workers will also have illegal disciplinary actions removed from their records for time that they were on strike.

“Walmart cannot continue its abuse of power any longer,” said Raymond Bravo who will have his record cleared of illegal disciplinary action for the time that he was on strike in 2012. “Our families and our communities cannot thrive when companies like Walmart create an economy of low pay, erratic scheduling and illegal threats.”

In reaction to the first strikes in Walmart’s history in 2012, Walmart managers and a top spokesperson began to illegally threaten workers for coming together and calling for better wages, schedules, and an end to the illegal treatment of workers. The decision reverses the disciplinary action taken against six striking workers at the Richmond store and addresses threats made by a Walmart manager in the Placerville store that the store would close if too many workers became part of OUR Walmart and the threat made by a manager in the Richmond store that he would “shoot the union.”

In the decision, the Administrative Law Judge notes that “some associates were offended when [Walmart store manager] Van Riper stated ‘if it was up to me, I would put that rope around your neck’ when associate Markeith Washington put a rope around his (Washington’s) to assist with moving a heavy counter.” Workers at the Richmond store sent a letter to the company about this store manager which stated, “By using racist remarks and threats of physical violence towards Associates he has created a work environment that is threatening, harassing and intimidating.”

The decision is the result of one of several local complaints that the Board has prosecuted against the company.  Recently, after OUR Walmart filed a charge on behalf of a fired worker in Texas, Walmart settled the case rather than have it brought to trial.

Additionally, the Board is in the process of prosecuting Walmart in a national complaint that includes counts of illegal firings and disciplinary actions involving more than 70 workers. According to the complaint, managers and the company’s national spokesperson illegally threatened striking workers and took illegal disciplinary actions against workers who were on legally protected strikes.

BACKGROUND ON THE NATIONAL COMPLAINT AGAINST WALMART

The Board is in the process of prosecuting Walmart on charges filed just after Black Friday 2012, when Walmart managers escalated their efforts to threaten and discourage workers from going on legally protected strikes. David Tovar, a spokesperson for the company at that time, even went so far as to threaten workers on national television, saying “there would be consequences” for workers who did not come in for scheduled shifts on Black Friday.

Additionally, the complaint covers the illegal firings and disciplinary actions that occurred after 100 striking Walmart workers took their concerns to the company’s June shareholder meeting in Bentonville.

In 2013, American Rights at Work/Jobs with Justice released a white paper documenting Walmart’s extensive and systematic efforts to silence associates. At that time, there were more than 150 incidents in stores across the country, with few signs that Walmart would soon stop targeting those who speak out and act collectively.