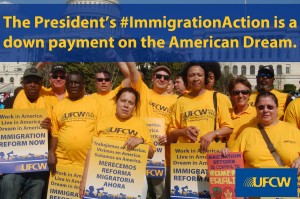 “Today the President announced he will take belated but necessary action to provide relief to immigrant workers, families, and communities. Make no mistake—this is not a substitute for comprehensive immigration reform. But it will prevent the deportation of many immigrants who would have qualified for citizenship under the Senate bill that passed over 500 days ago.

“For nearly a year and a half, the House Republican leadership has refused to take action to fix our broken immigration system. The President has both a legal right and moral responsibility to step in.

“At the UFCW, this has been our fight for decades. Our members and their families have persevered through raids and deportations. UFCW members have mobilized to defeat racist ballot initiatives and our union has assisted workers with the legalization process while negotiating contracts that protect our members where the law fails to. All along, those in UFCW gold have lobbied for comprehensive immigration reform at protests, marches, rallies, town halls, and just yesterday, in front of the White House.

“We will continue to call on Congress to send legislation to the President’s desk. But with no bill to sign, President Obama is rightly using his pen to provide relief to those who are trying to make a better life for themselves and their families. Executive action is not all we need or deserve. But it is a step in the right direction and for that we are thankful.”