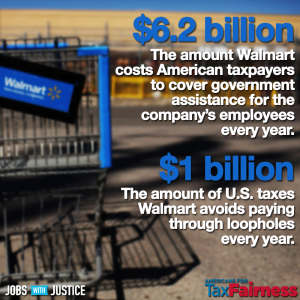 Americans for Tax Fairness just released a report denouncing Walmart’s tax-dodging. The report outlines how Walmart currently “cuts costs” by dodging its fair share of U.S. taxes, and how it stands to further “cut costs” if corporate tax rates get slashed and the United States adopts a territorial tax system. The study also shows how Walmart pursues its ends by lobbying members of Congress, contributing to candidates to gain access on Capitol Hill, and working through large business coalitions. More key findings include how Walmart avoids paying about $1 billion a year in taxes, has stashed $21.4 billion in offshore accounts, and is spending millions more lobbying for further reductions and new loopholes. All this comes after the previous report that U.S. taxpayers are subsidizing $6.2 billion a year due to their low wages and (mostly) non-existent benefits.

A petition asking Walmart President & CEO to stop their tax-dodging and ripping off the American people is also being circulated.

One Response to “New Report Released on Walmart’s Tax Dodging”