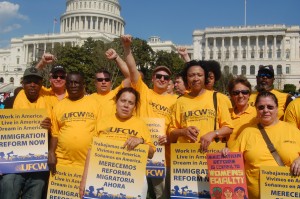 On Wednesday, UFCW members will gather in front of the White House with community allies to call on the President to deliver the most inclusive changes to immigration policy possible through executive action.

UFCW members know how much work it takes to put Thanksgiving dinner on the table. We have been working hard in our processing plants and grocery stores for months in preparation. But many workers who produce Thanksgiving foods will have an empty place at their own family tables for a loved one who has been deported under this country’s broken immigration system.

On Wednesday, UFCW members will gather in front of the White House with farm and food processing workers, Congressman Luis Gutierrez, and members of the United Farm Workers (UFW) to remind the Americans of the people behind the Thanksgiving meal and call on the President of the United States to deliver the most inclusive changes to immigration policy possible through executive action.

The event will shine a spotlight on members of the UFCW and the UFW who will present a representative sampling of the Thanksgiving foods harvested and processed by immigrant workers.

In addition, farm workers will also deliver letters from across the country, explaining why administrative relief is so important to their communities. Many of the letters include invitations to the President to fill an empty seat left by a deported worker and share a Thanksgiving meal with the family members left behind.

Join us online by watching the livestream of the event tomorrow at 12:00 EST at www.americasvoice.org/livestream or by joining the conversation on twitter using the hashtag #ThanksgivingWorkers.