Bloomingfoods Workers Win Voice on the Job with Local 700 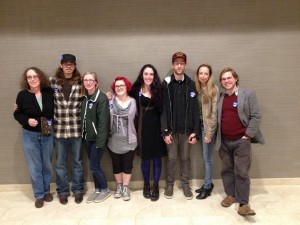 In an accelerated, fair process marked by company neutrality and community involvement, around 250 workers across five Bloomingfoods Coop grocery stores and a commissary that supplies ready-made food have chosen a real voice at work with UFCW Local 700.

OnPoint readers first heard of the Bloomingfoods workers when they asked for your help in getting their company to remain neutral and let them have a free and fair choice to join a union. With your help, the company committed to a fair process and the workers overwhelmingly voted to join with their fellow grocery workers in Local 700.

In addition to the hard work of UFCW activists and members across the country, members of UFCW 700 and 23 worked hard to support the efforts of the organizing workers on the ground.

“This marks the end of our unionizing campaign,” member owner and employee Kaisa Goodman said. “But this is just the beginning of our contract campaign…one thing has ended, but something bigger is about to begin.”