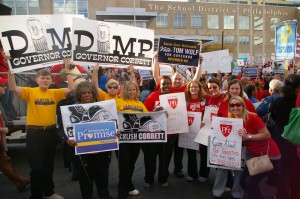 On October 16, members of UFCW Local 1776 showed support for the Philadelphia Federation of Teachers (PFT) in their fight for better wages and benefits at the “Turn Up For Truth” rally in Philadelphia.  The rally, which drew thousands of teachers and community supporters, was held in response to the School Reform Commission’s (SRC) decision last week to cancel its contract with the PFT.

“How we treat teachers sends a clear message to our children about what our priorities are,” said UFCW Local 1776 President Wendell W. Young IV.  “The SRC’s decision was a calculated and cowardly one that sends the wrong message about the hard work and sacrifices teachers make every day.  Local 1776 will do what it takes to show solidarity with these teachers and their students until they get the fair contract they deserve.”