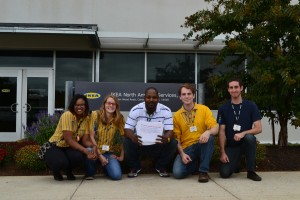 IKEA workers converged on the North American headquarters of IKEA to deliver a petition with more than 6,000 signatures, asking the company to invest in their American workers.

Last week, IKEA workers converged on the North American headquarters of IKEA to deliver a petition asking the company to invest in their American workers. The petition, started by workers at a Seattle Ikea store, had been signed by nearly 6,000 IKEA workers and customers with international support from 101 different countries.

IKEA workers traveled to the company’s North American headquarters in Conshohocken, Penn., in hopes of meeting with Acting U.S. President Rob Olson. The workers planned to present their petition and discuss the needs of thousands of IKEA store workers who are trying to turn their retail jobs with the company into fulfilling careers.  Full-time positions would complete the company’s stated goal of providing living wages while benefiting the company through better retention and increased productivity.

“As a single mother, a consistent schedule is important to me because I want to make sure that I am available and fully involved in my children’s education. I also want to have a stable income for my family. I shouldn’t have to work two jobs to make a living, and that’s why we started a petition calling on IKEA to provide more full-time jobs,” said Martina Morgan, a store worker from IKEA Seattle.

Unfortunately, President Olson was unavailable to meet with the workers. Instead, workers met with a human resources representative who refused the workers’ request for an assurance that employees who signed the petition would not face retaliation from company management for speaking out. IKEA workers who have signed on to store-level letters or asked management for group meetings to discuss improving working conditions have reported being retaliated against by management. Without an assurance that workers would not face retaliation for signing the petition, the worker delegation could not, in good conscience, leave the petition with the human resources representative.

Even so, the workers delivered a powerful message to IKEA management: IKEA workers and their customers are united and will continue to fight until workers have a voice on the job at IKEA. IKEA workers want careers that give them enough hours each week to earn a living wage. The workers plan to continue to organize and collect more petition signatures from their coworkers until President Olson agrees to accept the petition without the potential for retaliation and meet with his store workers.