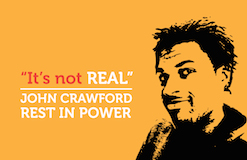 “It’s not real.” Those were three of the last words John Crawford III uttered before he was shot dead by police while shopping at a Walmart.

Last month, John Crawford III was killed by police while shopping in a Walmart store in Ohio. Police were called to the store by another customer who described a “Black male about 6 feet tall” waving a gun. Crawford was actually leaning on a toy pellet gun — barrel pointed down — which he had picked up from one of the store’s shelves.

Walmart has video surveillance footage of the events but has refused repeated requests from John Crawford’s family to publicly release the tapes. Join Making Change at Walmart ally ColorOfChange and sign the petition to demand Walmart release the tapes publicly to ensure justice for John Crawford and help customers and workers feel safe in Walmart stores.