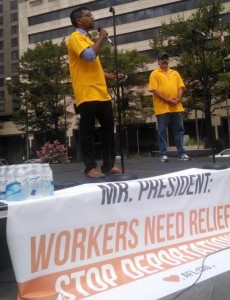 UFCW Local 400 activists joined labor and immigrant rights allies on Saturday at a march to call on President Obama to act on immigration reform.

The march was part of the #Not1More campaign, which calls attention to the fact that after months of shutting down ICE offices across the country, challenging unfair deportations and inequality through actions, signing petitions, and educating elected officials, the American labor movement continues to call on the President to provide administrative relief from deportation. He has announced that he will do what is in his power on immigration, and the #Not1More campaign encourages him to do just that.

UFCW Local 400 members, including Safeway worker Yves Gomes, spoke at the event on Saturday, encouraging the president to go big on immigration and fix our broken system.“I attended the rally and spoke out because this issue is very important to me, that we urge the president to stop deportation. Not one more. Just a little over five years ago, my mother was deported, and a year before that, I lost my father to deportation.  I wanted to help shine a light on how this issue deeply affects so many families in this country, on a daily basis. Even though they are the most visible faces on the issue, it’s not just about young people. We are fighting for the entire undocumented community, for parents like mine and for workers who come to this country to make a better life for their families.”

Yves went on to say, “If I could, I would tell President Obama to please stop deportations – to please stand with our families. He’s given Congress the chance to act, but they either won’t or are unable to – so now it’s time for him to be bold and to take action, and fix our broken immigration system.” 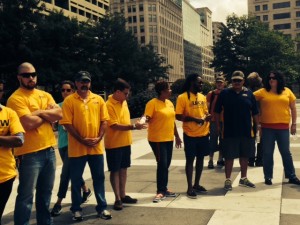 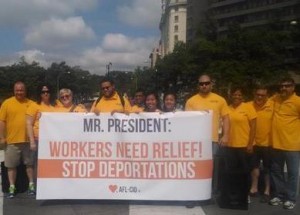