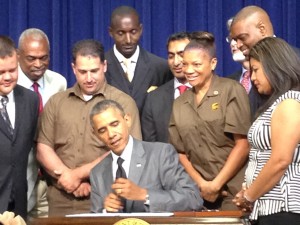 President Obama signs an executive order designed to ensure that the United States only does business with companies that follow labor laws and respect workers’ rights.

UFCW International President Joe Hansen released the following statement in response to President Obama’s executive order designed to ensure that the United States only does business with companies that respect workers’ rights.

“The President’s executive order makes clear that the U.S. will not do business with companies that violate our nation’s labor laws. Employers who cheat workers out of wages, fail to provide safe workplaces, and illegally retaliate against those who try to organize a union should never be considered for a government contract. On the other hand, companies that uphold our laws and treat their workers with dignity and respect should be given preference when it comes to federal procurement.

“Today’s announcement builds on years of work by UFCW members and our partner unions to create a system that is fairer for workers and encourages a race to the top when it comes to labor standards. These efforts included a 2013 resolution passed unanimously by delegates to the UFCW convention calling on the creation of a ‘High Road’ procurement process.

“In the last several years, the meat and poultry industries have received over 1 billion dollars from taxpayers. Many workers in these industries work full-time yet are not paid enough to support themselves or their families. They also must endure dangerous workplace conditions and chronic underreporting of injuries by their employers. This executive order sends a message that companies who engage in this type of anti-worker activity must change the way they do business or lose access to their government contracts.

“I want to thank President Obama, Secretary of Labor Perez, and all those involved in crafting this executive order. Today’s announcement is an important first step in ensuring our government is doing everything in its power to protect America’s workers.”