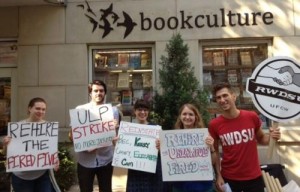 Book Culture workers in New York City went on strike in support of their coworkers who were fired for voting to join the RWDSU. Most of the workers have since been re-hired following the strike.

Four terminated workers at two New York City Book Culture bookstores were re-hired a day after their colleagues walked off the job to support them. The workers were fired from Book Culture last week after casting votes to have a union voice on the job and join the RWDSU.

“I feel great. I’m so relieved and glad we didn’t have to go any further. I’m relieved to finally get back to work,” said Kerry Henderson, one of the fired workers. Book Culture workers walked off the job in protest of their coworkers being fired and business at the stores slowed to a trickle as the community rallied behind the workers. Workers from the two locations recently voted overwhelmingly to join the RWDSU in hopes of creating a channel with management to improve the working environment and make other positive changes at the stores.

“We like working at Book Culture, and we like the stores. But the underlying thing is that everyone wants a collective voice, and more direct pathways to raises and promotions,” said Bec Goodbourne, one of the fired workers who leafleted on a picket line near the 112th Street Book Culture store.