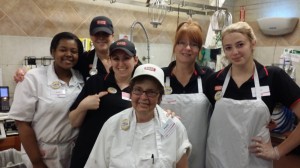 UFCW Local 23 along with other allies like Pittsburgh UNITED and Working America, are coming together to help launch a new good jobs initiative called “Pittsburgh Works.”

UFCW Local 23 members began thinking about the initiative in connection with its Giant Eagle campaign that recognized grocers that treated workers well. They then expanded the idea to include other types of workers, like janitors and retailers.

Earlier this month, UFCW Local 23 members and other allies involved with the new program held an action to support Walmart moms who went on strike across the country, as they protest Walmart’s retaliatory labor practices and policies against workers who speak out for better jobs.