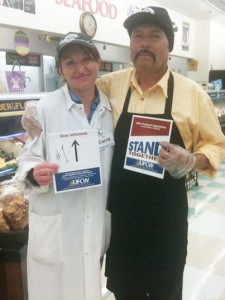 UFCW members at Vons, Ralphs, and Albertsons grocery chains in southern California have ratified a new contract, avoiding the possibility of a strike.

The new contract that expires in March 2016, covers 60,000 members from UFCW Locals 8GS, 135, 324, 770, 1167, 1428, and 1442. The two-year agreement provides members with a fair wage
increase and bonuses. Health insurance coverage will continue with no increase in employee premiums and no increase in out of pocket expenses to members for the full two-year period. Retirement benefits are also secured through additional contributions by the employers. The contract is designed to protect members through the instability of the merger process between Albertsons and Vons.

After four months of negotiations, the agreement was ratified by all seven locals just one week after a final marathon session of seven consecutive days and nights of back-to-back bargaining between representatives of the UFCW locals and the corporations that own Ralph’s, Albertsons and Vons, with the assistance of Federal Mediators.